Do You Call This A Life? 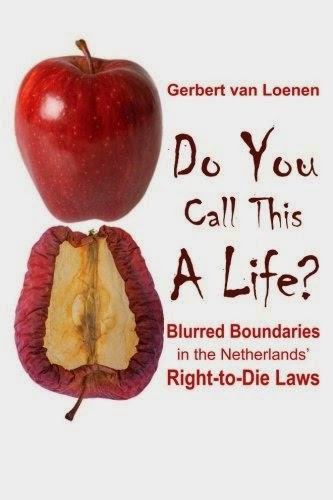 Gerbert van Loenen, a Dutch journalist once “regarded euthanasia  as a symbol of Dutch progressiveness” but now “I have changed into a person who is more reserved on the subject “. Van Loenen ‘s book came about after noticing the harsh attitude of Dutch people when they speak about persons with disabilities. Van Loenen’s partner Niek was left with disabilities following surgery for removal of a brain tumour.  Born of personal experience, his book  provides an in depth analysis of euthanasia in the Netherlands.  Barbara Kay, a columnist for the National Post wrote two articles about the book  offering readers much information about the practice of euthanasia in the Netherlands.

Kay’s first article (National Post – January 28) examined the Dutch euthanasia law. Euthanasia advocates and others often cite a right to autonomy and  “self-determination,” as a reason to allow euthanasia and assisted suicide. Van Loenen explains that is not the reason behind the Netherlands legal acceptance of euthanasia. From Kay’s article:

But the Netherlands’ euthanasia law does not recognize any such right. In 1984, the country’s Supreme Court accepted euthanasia, but rejected self-determination as the driver. The law in fact focuses on the right of the physician to exercise his compassion in what is deemed a “situation of necessity.” Citizens “may request,” but cannot demand, euthanasia. So in fact the law endorses a species of medical “paternalism.” Van Loenen claims this compassion-based perspective “is the opposite of self-determination,” which he continues to support.

What happens when euthanasia is allowed? Kay continues:

One of van Loenen’s settled convictions is that what begins in compassion invariably creeps over to the dark side. Up to 1,000 Dutch citizens are killed every year without express consent, according to van Loenen, either because they are incompetent (dementia) or in comas, or too young. In 14% of the without-consent cases, people are actually competent, but not consulted. Typical reasons given for euthanasia by doctors in such cases are “consultation would have done more harm than good,” or “this course of action was clearly the best one for this patient,” or it was “the request or wish of family” — a far cry from the self-determination principle debate began with.

These doctors have acted outside the law, but are rarely convicted, as judges are reluctant to call “termination of life without request”… murder. Indeed, van Loenen says, cultural acceptance of euthanasia has progressed to the point that it is no longer the physician who ends someone’s life without request who must justify his actions; rather it is the physician who decides to prolong a life perceived as meaningless who feels societal pressure.

Van Loenen’s books highlights what Kay describes  as a most “unsettling aspect of this fascinating and informative book…- the “better off dead” person – as the discussion turns more and more to the sensibilities of those who are affronted by his continued existence. “
Her second article explains the expansion of euthanasia once it is permitted. She writes:

Once you accept the logic that suffering justifies killing, it is not easy to set boundaries. The Netherlands’ experience shows that euthanasia spreads to individuals that other people — physicians or family members — consider better off dead, and that judges’ rulings tend to bend the law to satisfy the zeitgeist. Regular physician surveys offering guaranteed anonymity since 1991 concerning all end-of-life medical decisions indicate euthanasias without request are performed 300-1,000 times a year. In cases that arrive in court, judges almost invariably exonerate physicians on a “situation of necessity” principle. (According to van Loenen, there is no similar research in other countries, which makes the Netherlands “a unique laboratory that all the world can come and visit.”)

Physicians can influence patient decisions. In his book, van Loenen recounts an interview given by  physician Groen-Evers to NRC Handelsblad in which he states:

Groen-Evers said: “And patients are influenced much more than physicians realize. If you mention euthanasia, they will ask for it. If you mention palliative care, then that is what they choose.”

This entry was posted in Assisted Suicide, Euthanasia. Bookmark the permalink.