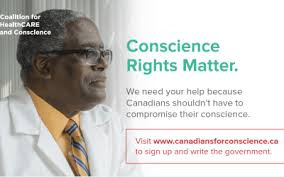 The Coalition for HealthCare and Conscience is seeking a judicial review of the College of Physicians and Surgeons of Ontario (CPSO) policy requiring physicians who oppose euthanasia and assisted suicide, to refer patients to a physician who will kill.

According to the Coalition:

The College of Physicians and Surgeons of Ontario (CSPO) demands that doctors who conscientiously object to assisted suicide refer patients seeking to end their lives to other physicians who will provide the procedure.

No other foreign jurisdiction that has legalized assisted suicide requires doctors to perform or refer for this procedure. Other provinces have already implemented guidelines to protect doctors who object to providing or referring for assisted suicide.

Larry Worthen, the executive director of the Christian Medical and Dental Society of Canada, and one of the coalition group members stated:

“The current approach of the CPSO demands that doctors set aside their morals and go against their conscience to directly refer for assisted suicide,”

“In our view, effective referral and participating in assisted suicide are morally and ethically the same thing.” 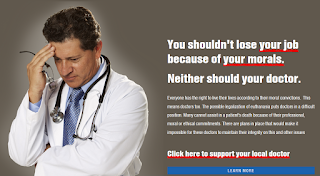 Three physicians groups are working together to legally challenge the CPSO policy. The Coalition is demanding that the CPSO amend their policy to enable physicians who oppose assisted suicide to continue to practise medicine in Ontario. According to the Coalition:

Protecting conscience rights of health practitioners would require only minor accommodations, such as allowing patients direct access to an assessment or allowing complete transfer of care to another physician.

A strong majority of Canadians are on side with the coalition’s beliefs on conscience protection. A recent Nanos Research poll found that 75% of Canadians agreed that doctors “should be able to opt out of offering assisted dying,” compared with 21% who disagreed.

Larry Worthen emphasizes that Conscience rights can and must be protected:

“There are ways to respect patients’ wishes while protecting conscience rights,”

“Not to do so is discrimination against people for their morals and convictions, which are protected in the Canadian Charter of Rights and Freedoms.”

The Coalition for HealthCARE and Conscience represents a group of like-minded organizations, including representing more than 110 healthcare facilities (with almost 18,000 care beds and 60,000 staff) and more than 5,000 physicians across Canada, that are committed to protecting conscience rights for faith-based health practitioners and facilities. We were brought together by a common mission to respect the sanctity of human life, to protect the vulnerable and to promote the ability of individuals and institutions to provide health care without having to compromise their moral convictions.

This entry was posted in Assisted Suicide, Euthanasia. Bookmark the permalink.