Nova Scotia court decides that a man who may not be dying and may be delusional can die by MAiD (euthanasia).

Update: Katherine’s lawyer requested a judicial review to prevent her husband’s death until after the Sept 24 court case. On Sept 10 we learned that the review was dismissed. It is crazy that the court is willing to hear the case on Sept 24 but Katherine’s husband could die by lethal injection before the case, even the the court may decide that he doesn’t qualify.

Taryn Grant reporting for CBC News Nova Scotia that a man who has received conflicting assessments for MAiD (euthanasia) and whose wife of 48 years says is delusional about his medical condition, can go ahead and die by euthanasia. Grant reported:


A Nova Scotia Court of Appeal judge has upheld a lower court decision that effectively allows a man to go ahead with a medically assisted death, in spite of his wife’s efforts to stop him.

The 83-year-old man from Bridgewater, N.S., was assessed by physicians and approved for medical assistance in dying (MAID) earlier this year, but his wife, Katherine, 82, filed for an injunction with the Supreme Court of Nova Scotia, forcing him to cancel his plans.

CBC News is identifying the couple only by the woman’s first name to protect their privacy and his ability to access health care. His wife has threatened to sue health-care providers who help her husband access a medically assisted death.

While the husband says he’s suffering and near the end of his life because of advanced chronic obstructive pulmonary disease (COPD), his wife says his wish to die is not based on physical illness, but anxiety and mental delusions.

The couple have known each other for more than 60 years and have been married for 48.

Hugh Scher, the lawyer for Katherine sent out the following comment:


The decision calls into serious question the arbitrary application of the criminal law in a way that puts vulnerable people at risk.

The notion that a court should be precluded from resolving such a fundamental conflict about capacity and that the legal requirements of the criminal code are met is a glaring violation of the rule of law in Canada that puts vulnerable people at risk of death.

The notion that individuals should be free to see 10 doctors who find they lack capacity, but then find 2 more that say they don’t to justify an assisted death is troubling and renders the safeguards and protections of the criminal law completely meaningless.

Katherine calls on Parliament, the Nova Scotia Legislature and the courts to fix an arbitrary and broken legal process that permits the intentional killing by euthanasia of those who lack capacity and who don’t meet the most basic requirements of the law.

The Supreme Court of Canada made clear that legalization of euthanasia in Canada depended completely on parliament’s ability to implement reasonable safeguards to protect the most vulnerable of Canadians.

Today’s decision by a single judge of a court of appeal on a procedural matter demonstrates how woefully inadequate the present regime and procedures are to protect vulnerable people lacking capacity from being put to death in Canada.


The case could still go to a formal appeal hearing and is scheduled to do so on Sept. 24.

Katherine’s lawyers noted last week that should her husband go ahead with the MAID procedure before then, it would render the appeal moot. This was one of their arguments for an extension of the interim injunction.

The Euthanasia Prevention Coalition finds this decision to be untenable.


To schedule a hearing on the merits of the injunction for September 24 and then lift the temporary injunction on September 4, allowing him to die by lethal injection, makes a mockery of justice.

If the case continues, and if it is decided that the husband lacked effective capacity to decide or did not qualify under the law, but at the same time he had already died by euthanasia is farcical.

Katherine lawyers may ask for a formal review of the decision, but her husband might be dead before the review can be considered.

This is a clear example of justice being denied. 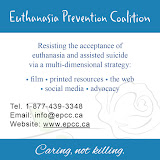 Katherine could not have carried out the legal proceedings and or file an appeal without the support of the Euthanasia Prevention Coalition. She loves her husband and she launched the legal action to prevent the wrongful death of her husband, but she could not do so without help.
EPC agreed to pay the legal bills, but in turn, we need your financial support.

Donate to the Euthanasia Prevention Coalition (Link) by:
We will provide more information, but based on privacy, we are providing as much information, at this time, as possible.

Thank you for considering EPC in this precedent setting case.
This article was first published on the Euthanasia Prevention Coalition’s blog and is republished with permission.
This entry was posted in Uncategorized. Bookmark the permalink.